Alignment: What is Alignment and Why it is Important, Part One 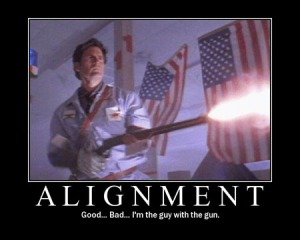 Hail to the King, Baby.

This may be the first post in a series of discussions on the topic of alignment in the Dungeon and Dragons game.  Indeed, if my musings are successful, it may have application in other games.  As the title suggests this will be a philosophical examination of “alignment” and its role in gaming.  Those who have been in my gaming groups know that I take alignment fairly seriously, albeit, in an indirect way.  Considering my serious approach to alignment, I thought it would be a good idea to place these thoughts on the internet for all to examine, think about and comment upon.

So, what is alignment?  Within the Dungeon and Dragon’s context, the 1st edition Advanced Dungeon and Dragon’s Player’s Handbook (hereinafter “First Handbook”), doesn’t provide much guidance as to what it is.  Gary Gygax writes that “after generating the abilities of your character. . .it is necessary to determine the alignment of the character.” (emphasis added).  After a brief description of the classic nine alignments, under a sub-heading, “Changing Alignment” in the First Handbook, Mr. Gygax explains that, while involuntary change is possible (presumably through magical means), “it is very difficult for a character to voluntarily switch from one to another.”  In fact, he suggests that changing alignment is near impossible and would require an in-game story line that takes the form of a quest to make the change.  So, it is clear from Mr. Gygax’s perspective that alignment is important, but we don’t know what it is on its face.  We can only infer from the nine classic alignments that it has something to do with a character’s moral worldview.

Fast forward thirty years and the 4E Player’s Handbook spends some considerable time discussing alignment compared to what the First Handbook provided players.  Indeed, the 4E Handbook has provided a definition of alignment, namely, it is a character’s dedication to a set of moral principles.  However, it doesn’t seem to be giving alignment the same emphasis as Mr. Gygax.  For, 4E prefaces its discussion of alignment with a conditional statement: “If you choose an alignment, you’re indicating your character’s dedication to a set of moral principles.”  It logically follows from this conditional statement, that “alignment” is not necessary for the development of a character, i.e. a set of moral principles.  I find this incredibly odd, but perfectly foreseeable by a cursory glance at the historical evolution (devolution?) of the alignment system.

In 2ed Advanced Dungeons and Dragons, the standard nine-alignments were presented, but altering one’s alignment was significantly easier.  It was merely a matter of acting a different way for a period of time and suffering an experience point loss.  Dungeons and Dragons 3.0 made it even easier as a player could simply choose to be a different alignment without any penalty.  This suggests that the subsequent authors of the game do not think alignment is an important corner stone to a character’s development or personality.  This attitude, of course, is fully realized in the 4th Edition of the game.

To be fair, a cursory look at the Dungeons and Dragons game as a whole will show that the 4E incarnation has sacrificed realism for a more streamlined and efficient game.  Perhaps, from the game-designers view, imposing such an obligation upon a player to pick an alignment was seen as too distracting from the goals of the game.  I mean, after all, this is a game about killing monsters and getting “mad loot”, right?

Well, it could be.  If that is what you and your players are interested in doing, then alignment isn’t all that necessary.  However, if story-telling is part of the fun of Dungeons and Dragons, or any role-playing game for that matter, then alignment should be a necessary component to character generation, a component that ought to be taken seriously.  So what is alignment?

“the adjustment of an object in relation with other objects, or a static orientation of some object or set of objects in relations to others.”

Alignment, generally speaking, is the ordering of objects based upon a relation of some kind.  The Merriam-Webster’s Dictionary qualifies the ordering as the “proper positioning” of the object in relation to other objects.  If an object is not properly positioned, then it is not in alignment.

When alignment is placed in the moral and ethical realm, an alignment requires the exercise of volition.  This exercise of volition is important, as it requires the character to discern the order to which they are aligning themselves.  Choice is necessary for morality and ethics.  Without choice, there cannot be any responsibility and morality is a set of beliefs concerning responsibility and how one self-legislates.  Ergo, a character’s alignment is the conscious arrangement of a character’s actions (object) into a proper positioning with a higher moral order.

When a character acts, as the definition suggests, they are affirming their worldview by aligning the action in conformity with a set of moral principles.  Therefore, when on a Chaotic Evil character acts, he is affirming his commitment to “entropy” and “self-serving desires” and his ultimate rejection of any strict moral hierarchy, the makings of a very compelling villain.  Conversely, a lawful good player will act, always, to promote the law and the good (generally speaking).  Certainly, humans are fallible (and I suspect so are dwarves and elves), and mistakes will be made.  These mistakes can make for a compelling story.  The classic example is the tragedy of a paladin’s voluntary/involuntary misalignment to the Law and the Good.  It is a tragic tale, and the paladin’s subsequent redemption is an inspirational story.  Without alignment, these compelling characters cannot be made and their compelling stories cannot be told.

But the definition of alignment is a relational one.  I will explore this aspect in a future post.

This entry was posted on September 16, 2010 by Matthew T. Austin. It was filed under Role-Playing and was tagged with Alignment, characters, Dming, role-playing.